Scaling your restaurant requires trust in others to perform critical operations.

It's a classic dilemma - how do you grow your business while maintaining what made you a success in the first place? Restaurants deal with this all the time. Ultimately, scaling means you have to delegate responsibilities and trust others to carry on the values and quality that you instilled at the inception of your brand. So ask yourself, do you have the tools to make this happen? 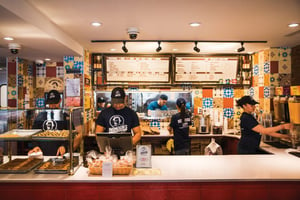 Mamoun's Falafel has been serving high quality Middle Eastern Food since it first opened its doors to the NYC public in 1971. Like many restaurants, it began as a family owned and operated business. Even as additional locations opened in the following decades, founder Mamoun Chater's family members were put in charge of the new units. It wasn't until this decade when the beloved brand finally began franchising.

Like many restaurant founders, Chater had to learn how to delegate responsibilities without compromising the integrity of the brand. That's why it took so long before they entertained the idea of franchising. Without the right tools, it's hard to bring in outsiders without affecting quality or brand values.

"There always had to be a family member working at all hours of operation. We knew that was never a recipe that you could use to franchise,” said co-owner and CEO Hussam Chater, in a recent feature in Retail and Restaurant Facility Business.

So what changed? Why was Mamoun's Falafel finally able to delegate responsibilities to franchisees without compromising everything that made the brand so beloved by its customers? It was a BOH system technology that allowed management to set and enforce brand standards.

Why was Mamoun's Falafel finally able to delegate responsibilities to franchisees without compromising everything that made the brand so beloved by its customers? It was a BOH technology that allowed management to set and enforce brand standards.

Effective franchising requires you to strike a balance between providing franchisees with the flexibility they need to be successful, while maintaining tighter control over critical components of the brand. By enforcing company-wide standards using a BOH system, each location, even those with more managerial freedoms, will follow best practices that optimize the most critical operational costs at every restaurant: the food and labor costs.

A new location with inefficient scheduling or high levels of inventory waste could seriously impact profits. As such, restaurants need a platform to facilitate a healthy franchisor/franchisee relationship and they need the ability to collect and process data, build meaningful reports, and identify problem areas at any stores so they can be fixed immediately. 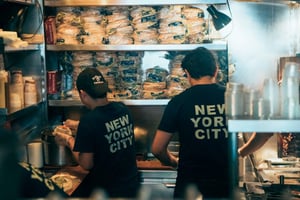 In 2019 Mamoun's partnered with CrunchTime to help foster its lofty growth goals. Today there are 10 locations in operation, but after working with franchise development firm Fransmart to sell 50 units in 2015, there are aggressive expansion plans in the works. The Chater family knows that with each new location, they will have to delegate more responsibilities and entrust new operators to abide by what made the restaurant operation a success in the first place. That's why they are entrusting CrunchTime.

"From a franchise perspective, that’s very helpful because it allows us to establish benchmarks for all of our franchisees," Chater says. "It’s everybody doing the same input and getting the same output.”

"From a franchise perspective, that’s very helpful because it allows us to establish benchmarks for all of our franchisees," Chater says. "It’s everybody doing the same input and getting the same output.”

A restaurant food and labor operations platform can help foster successful growth because it keeps everyone on the same page. Selecting a system with proven franchise functionality will ensure both franchisees and franchisors benefit from a consistently run operation.